You probably came already across the magic word II-V-progression. Evil minds allege that Jazz consists only of such progressions since the Realbook is full of it (e. g. Recordame by Joe Henderson)!

Chord degrees is a topic that you should get familiar with it. Here the SacleTwister is a very useful tool, too.

If within a major scale 4 thirds are piled up the result will be seventh chords for each degree. They can be numbered with roman letters and then are called positions. In C major that means with the II-V-progression the chords Dm7 and G7 (Dominant) are to be used.

Do you ask yourself sometimes how the great musicians get their countless chords and scales and create from them the most beautiful improvisations? You too can double your repertoire all at once! The magic word is substitution.

A substitute means that a chord is played instead of another chord. In that way new possibilities arise to expand a harmony. The same is true for arpeggios or scales. Also an improvisation can be made more interesting or difficult scales can be even made simpler.

Chords of a family can be substituted at will with each other.

Chord and Mode Substitution in Major and Minor

With the II-V-I progression are here possible substitutions listed.

Chord Substitution in Major with example 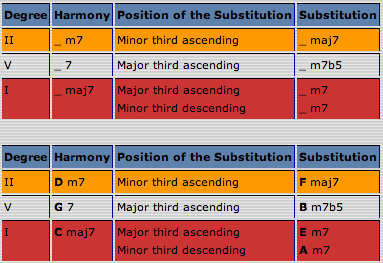 *Tritonus (tritonus, lat./ greek = three tone step)
The Tritonus compromises 3 whole note steps and correlates to an augmented fourth. The Tritonus was in the past considered the „diabolus in musica“, „the devil in the music“. The use of the interval was forbidden and didn’t fit the composition method at that time.
Exemple: