With this tool all chords of a score can be decoded! It serves to translate the sometimes complicated chord symbols into notes. For that the chord symbols are first replaced by a numbering structure. On the utilities-wheel the numbers are arranged in a circle and show you the notes on the background that are contained in the sought chord 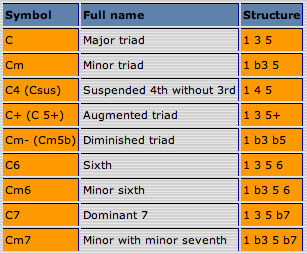 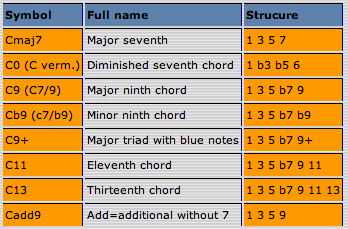 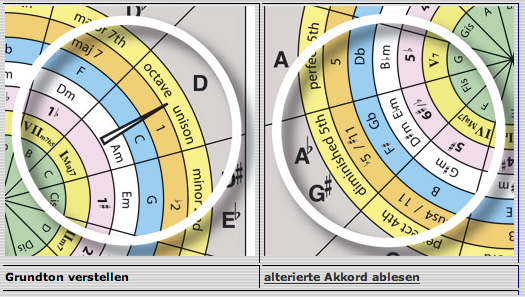 What is a chord?

A chord is the sound of three or more notes together. An exception are the so called power chords that contain only two notes (triad without third). The note sequence of a chord is variable (called inversion).

Whether C E G or E G C or G C E, it is always the same chord. Also allowed is the expansion of a chord with an octave with one of the chord notes (e. g. C E G E). It still is a triad!

For the construction of chords usually notes from the own scale are used. For the chords of the C major scale only the notes C, D, E, F, G, A and B are available. This is also the reason that either minor or major thirds come up. Chords that contain none scale notes are called altered chords.

The simplest chord is a triad. It is built by piling up thirds and contains 3 notes, the root, the third and the fifth (second third). Minor and major thirds produce 4 combinations of piling up thirds with the C Major scale.

The fourth combination is not part of the C major scale triads.

Triads of the C Major Scale

Recipe for the construction of a seventh chord

A seventh chord is triad that is extended by an additional third. The chord consist of the root, a third, a fifth and a seventh and is called therefore a seventh chord.

Recipe for the construction of a seventh chord

You have might seen the chord Csus4. It is called a suspended chord (suspended fourth) and contains a fourth instead of the third. The chord Csus9 has a D instead of a C.

Here are some examples:

Of course for the altered chords the Diminished Whole Note scale fits. It is located on the Dom7 color circle.

Two minor thirds piled up result in a diminished triad.

Three minor thirds piled up result in a diminished seventh chord. It is also a diminished triad with a minor seventh. With the first minor third the chord already has a minor character.

Chords and their Scales 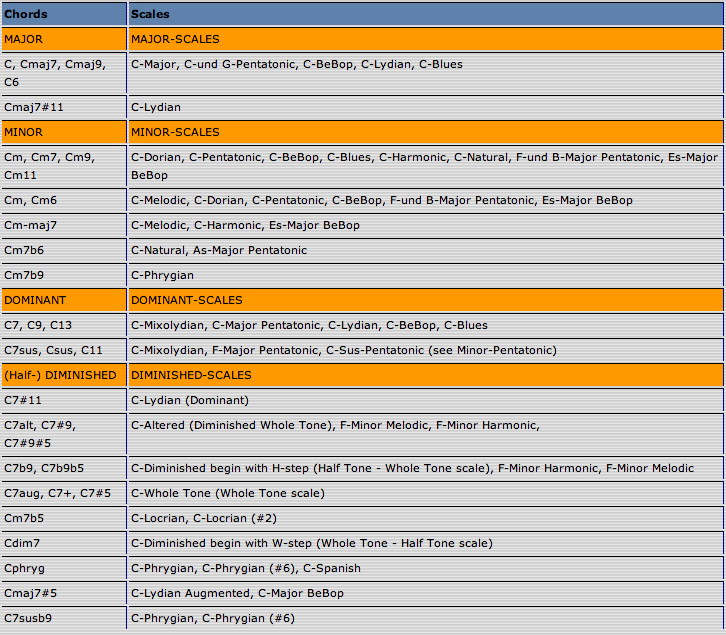